Today Is Rich With Hilarity

Andrew McCabe’s disturbing account of working for Sessions and Trump

“He didn’t read intelligence reports and mixed up classified material with what he had seen in newspaper clips. He seemed confused about the structure and purpose of organizations and became overwhelmed when meetings covered multiple subjects. He blamed immigrants for nearly every societal problem and uttered racist sentiments with shocking callousness.

This isn’t how President Trump is depicted in a new book by former deputy FBI director Andrew McCabe. Instead, it’s McCabe’s account of what it was like to work for then-Attorney General Jeff Sessions.

The FBI was better off when “you all only hired Irishmen,” Sessions said in one diatribe about the bureau’s workforce. “They were drunks but they could be trusted. Not like all those new people with nose rings and tattoos — who knows what they’re doing?”

It’s a startling portrait that suggests that the Trump administration’s reputation for baseness and dysfunction has, if anything, been understated and too narrowly attributed to the president.”

So. Not only is the entire administration a bunch of treasonous racists, they’re bumblingly out of date racists. Anti-Irish sentiments! In this day and age.

Over/Under on whether he’s aware slavery’s not a thing anymore — takers? 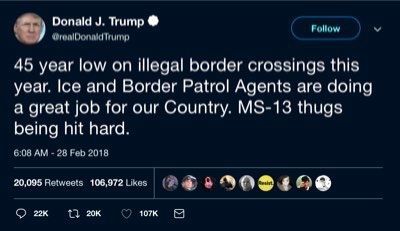 On Effective Leadership It’s All Opera, Baby There are stories like THE SOPRANOS that do the work to humanize and shade the majority of characters bumped off on-screen, the kind of stories that
Latest posts On Selfishness It Begins America in 3 Paragraphs Atlanta Washington Post Goes Tumblr Inspiration of the Day See Movie Clips of Any Phrase 2020 Wildfires - Lacma On Wallowing San Francisco + Los Angeles Videogrep Is Awesome Videogrep Is Awesome Eye Spy Entitled The Death of Privacy: Apple’s New Surveillance The Best of All Possible Dogs Partial{objects} Cobwebs Circles, Flat or Otherwise Plains Hog-Nosed Snake Pennyworth S2 Is a Shitload of Fun 70 percent Be Careful When You Cast Out Your Demons That You Don’t Throw Away the Best of Yourself. A Man for All Seasons My own suspicion is that the universe is not only queerer than we suppose, but queerer than we can suppose. Catisfied I Tell You, We Are Here on Earth to Fart Around, and Don’t Let Anybody Tell You Different. COVID-19 Means No Hocking Loogies on Screen At Least 30,000 U.S. Organizations Newly Hacked Via Holes in Microsoft’s Email Software — Krebs on Security Color Out Of Space inceldom is just crowdsourced depression.